The Texas Hill Country is a well-loved area of our state. With its rolling hills and booming wine country, it has become not only a vacation destination, but a retirement destination as well. It is the beauty of the area that called Andoni’s parents to build a home there recently. As the house plans developed and building got under way, they made several trips to the area to monitor progress. On one of those trips, we decided to join them at Black Rock Park, a public park managed by the LCRA (Lower Colorado River Authority). We’d never heard of the park, but upon some Googling, it looked nice. Situated on Lake Buchanan and with wonderful ‘new bathroom’ reviews? We were in!

Here’s where the park is in relation to Austin, TX:

Looking back on this short weekend excursion, there were three highlights: spending time with family, taking our dog camping for the first time and exploring the caves at Longhorn Cavern State Park.

We decided to take our dog, Bena (pronounced BEE-NUH) on this trip for two reasons. 1) We had just purchased a larger tent, so we could comfortably accomodate her. 2) Andoni’s parents were in their camper, so we had the option of leaving Bena safe, sound, and air-conditioned if we wanted to go on an excursion.

Was it a successful trip first dog camping trip? Yes because we didn’t have to board her and we didn’t have to miss her. Time and time again on trips, we’ve said to each other, “We should bring the dog next time.” So this time, we did. Bena got to jump in the car when we left the house, her most desired outcome to seeing a car being packed up, and at the park, she got loved on by her grandparents and other campers, she ran around and explored, she even fit in some quality sunbathing – her favorite pastime.

As for our sleeping arrangements, all was well. Since we had recently purchased the REI Kingdom 4 tent, we had plenty of room in our sleep setup to accomodate Bena’s oversized bed + our supplies crate + our two car camping sleeping pads with room to spare.

To be honest, the challenge to bringing the dog camping for the first time was one that we didn’t predict. We assumed hardships might be things like her being scared of the sound the wind against the tent walls, her jumping on camper children and frightening them (which is something she does to all children – out of love, and excitement of course, but nevertheless off putting to a child who wasn’t expecting to be jumped on by a big black dog). But neither of these things happened.

What did happen? Sticker burrs.

Unfortunately, the grass in Black Rock Park is full of sticker burrs, or grass burrs. Those little devils + Bena’s poodle fur, which acted like a velcro magnet = constant management. We must have picked 60+ burrs off of Bena each night. They wedged in between the pads of her feet, stuck to her ears and scratched her belly. As usual, she was a champ through it all, letting us pull and yank on the burrs til they came out.

Is this a game changer for returning to the park? Without the dog? No. With the dog? Absolutely. If your dog is like Bena and has the kind of fur that burrs stick to easily, we’d suggest you either stay somewhere else or buy your canine companion some booties to protect their paws.

Aside from the sticker burrs, the park itself was as-advertised. Clean, with new bathrooms and direct access to the lake. Andoni, myself, and Lynne (Andoni’s mom) even went for a midnight swim!

The other great thing about the park is its proximity to other hill country attractions like Longhorn Cavern State Park, which we explored for the better half of our Saturday afternoon.

When we zoom in on the map, we can see where Longhorn Cavern is in relation to Black Rock Park:

We can’t tell you enough how highly we’d recommend this park to our readers. When we honeymooned in the hill country a couple of years ago, we heard about the caves but, because of Andoni’s slight case of claustrophobia, decided to not venture under the ground that trip. After doing some more research however, we learned that the caves were open and airy, with a little over a mile of developed walking paths that you could peruse on their 90 minute guided tour. We had done the Discovery Tour at Natural Bridge Caverns just north of San Antonio a few years prior, and while that 3/4 mile, 75 minute tour was interesting, it was also very crowded with multiple low ceilings – not the most friendly tour for someone who wasn’t all that comfortable in small spaces.

After doing the guided tour at Longhorn Cavern, Andoni and I both agree that we’d do it all over again, and well before we’d revisit Natural Bridge Caverns.

What makes Longhorn Caverns so special? Well, for one, the crowds weren’t large. We went on a Saturday in July and had maybe 10-15 people on our tour. Additionally, while the caves are the focus of the park, they aren’t the only feature. With no fee to enter the grounds, you can easily come for a short hike and picnic. We didn’t explore the trails on this visit, but we did make time to check out the grounds and learn about the creation of the park in the 1930’s by the Civilian Conservation Corps. All in all, the park is very well done. It’s clean, accessible, informative, and enjoyable.

Of course, what made the experience the most enjoyable was the cave tour itself. And, most importantly, the caverns are spacious. Not only in height and width, but in feel. The smooth curved nature of the rock which dominates most of the tour makes the entire space feel airy and light – very much unlike what you expect to experience in an underground tunnel.

Of course, as with most caves, there were a few spots which were more cramped than others, but they didn’t last long and some even held interesting sights.

All in all, we agree that the $18 adult fee for the tour was money well spent. And during the hot Texas summer, the 68 degree environment is a welcome escape from the midday heat. 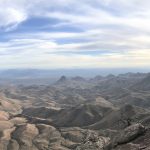 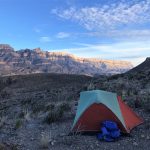 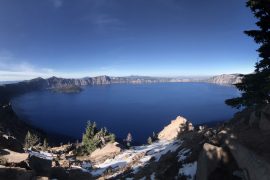 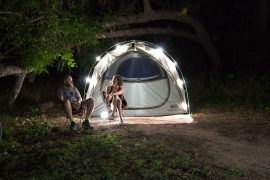 5 PLACES TO CAMP IN TEXAS THIS SPRING/SUMMER 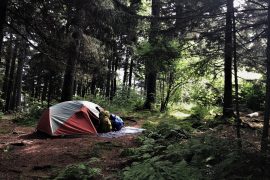 “DID YOU HEAR THAT?” – ON FEAR OF THE NOISES OUTSIDE YOUR TENT